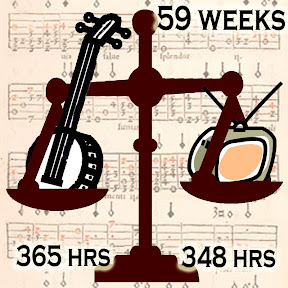 What a bummer! The Music Choice Bluegrass Channel has been dropped from my local cable. I was really enjoying that!

Here's what the Washington Bluegrass Association has to say about it:

On April 15th, Comcast Cable pulled (deleted) its Bluegrass Channel Broadcast. Many people are understandably upset about this. It may be possible to restore bluegrass on Comcast, if enough bluegrass fans send in a complaint. (Even if you don't listen to bluegrass on Comcast, do it for the sake of those who do!). You can make your opinion count. Take a few minutes and go to Music Choice online and register a complaint. Go to: www.musicchoice.com OR www.musicchoicetalktous.com to send in your comments or complaints. On the home page: scroll to the page bottom and select "leave a comment". On the comment page select in the subject line pull down "channel line-up changes" then write your message: 'bring back bluegrass!' Fill out the name info then select digital cable only (or your fav. service). Then check the No box to not receive marketing related stuff. Thanks and a tip of the hat to WBA member Sally Burtscher for reporting this story! Please pass this info on to your bluegrass friends.

The cancellation sparked a discussion at The Banjo Hangout. One of the forum regulars said he received this reply from Music Choice:

Despite your extremely vulgar and rude e-mail, I will try to explain.

The Bluegrass channel and Opera channel were removed from the Music Choice line up due to low listenership.


Be the first to comment on “Banjo versus TV: Week 59”