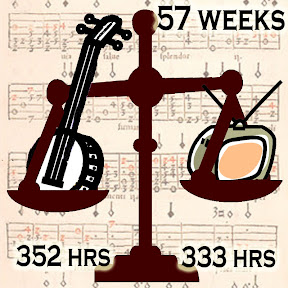 I owe you a link to a video for this week. It might take a while for the video to come together.

There's a Chicago artist who's proposed a whole-city-sings-a-song montage video and he's asked various groups at the Old Town School of Folk Music to help him create a demo. So this week The Hump Night Thumpers put on our jug band semi-finery and played Welcome Table on the street outside the school.

We recorded the event. Now the project guy is going to mix us together with other groups performing the same song and create one single video.

I'll provide a link to the finished product when it's been put together.

I'm told that the video caught a good shot of me nearly bonking another band member in the head with my banjo's peghead. I hope they use that part.


Be the first to comment on “Banjo versus TV: Week 57”

'How about a paper mache resonator?' 1 hr