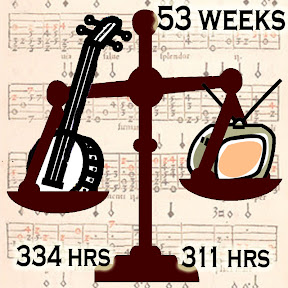 This week's big event is my annual (twice now!) trip to Shorty's Strickly Bluegrass Festival in East Peoria, Illinois. I'd gone to the festival last year and it was pretty nice to discover how much my jamming skills had improved.

Shorty puts on a great festival at the Stoney Creek Inn in East Peoria. The festival opens Thursday night with a Branson show; she brings in an act from Branson, Missouri. This year, as last year, the Branson act was Goldwing Express.

Other acts this year:

Stage acts run all weekend and there are jam sessions throughout the hotel. Last year I spent most of my time watching the acts and only a little time jamming. This year I reversed that, spending way more time in the jam sessions.

Things I learned at this week's banjo lesson — mostly having to do with preparation for jamming at Shorty's:


Be the first to comment on “Banjo versus TV: Week 53”

'I Can't Help Falling in Love With You' 2 hrs

'How about a paper mache resonator?' 4 hrs