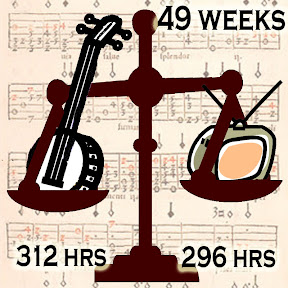 This week's event is something I made a big deal out of last year: I performed in Flatts & Sharpe's annual recital.

Last year (as you'll recall) I played a sing-along Preamble from Schoolhouse Rock, complete with slide show. It was pretty labor-intensive. But all that fuss and pomp helped to mask my lack of skill.

This year I'm a better player. The Banjo versus TV project has really helped. So with the urging of my banjo instructor, Dave, I decided to play it straight and to perform a simple medley of my two best songs: I'll Fly Away and This Land Is Your Land, with the latter played as a sing-along.

The performance went very well, except for one embarassing, rookie mistake.

No, the rookie mistake was that I walked up to the mic and told everyone that I'd lost my picks but was going to play anyway.

It's like saying, "Hey, everybody. If this next thing is bad IT'S NOT MY FAULT! It's the lack of picks."

Really, I know better. When there's some problem before a public presentation you shouldn't draw attention to it, or start off in such a weak, apologetic fashion. I should have just sucked it up and played.

Ah, well. I got the crowd singing along and everyone seemed to have a good time. I got lots of compliments.

Congratulations on sticking with your project, J.R.! Hey- we all learn the hard way. I once took only one set of picks with me on a trip down the Grand Canyon. I got the trip for free- all I had to do was play music at nights, and the second day out, my pickes washed out of my pocket and down the river. With constantly wet hands, playing wasn't fun after that! You're very right- if you don't make an announcement, nobody in the audience will know how good or bad you are- almost always, you're the only banjo player there, and most folks consider anyone who can play at all to be a real expert. People generally love the sound of the banjo, whether they admit it or not!

'Jim Mills Tuning for Will You Be Satisfied ' 17 min

'solid back resonator made with router' 2 hrs