Please note this is an archived topic, so it is locked and unable to be replied to. You may, however, start a new topic and refer to this topic with a link: http://www.banjohangout.org/archive/299063 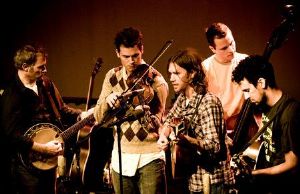 
This week's tune is quite different from most of what we've featured in the Scruggs-style TOTW. Old Crow Medicine Show's (OCMS) "Wagon Wheel" isn't a thoroughly bluegrassy song, but you'll hear it all the time at bluegrass jams (especially beginner-oriented ones).

The story of the song's writing is an interesting one... I'll keep it short by saying Bob Dylan recorded the chorus in a 1972 cut that is only available thanks to bootleggers, then OCMS' Keith Secor wrote the verses to it. They share authorship rights. (You can read a lot more about this via the Wagon Wheel Wikipedia page).

The song became very popular after it was released on OCMS' major label debut in 2004. An earlier version was released on the now out-of-print EP Troubles Up and Down the Road in 2001. It's been covered by a lot of artists. Old Crow Medicine Show's version was certified platinum in 2013. Darius Rucker's version went to #1 on the Billboard Country Singles chart.

And before anyone else says it, let me get this out there--I know a lot of folks dislike this song for various reasons--because it ain't bluegrass, because it's so overplayed, because it's too simple, because the lyrics seem cliché or don't make sense (Johnson City is east of Cumberland Gap, after all).

But despite the haters, this tune has a lot of fans in the beginner banjo crowd because it's singable and slow. So let's keep it positive and just enjoy it for what it is--a tossed-off Dylan tune finished 30 years later by the frontman for an old-timey folk band which then became a Billboard hit thanks to a black country singer who fronted a band named "Hootie and the Blowfish." You can't make this stuff up!

Typically played in G or A.

Headed down south to the land of the pines

Starin' up the road

And pray to God I see headlights

I made it down the coast in seventeen hours

Pickin' me a bouquet of dogwood flowers

And I'm a hopin' for Raleigh

I can see my baby tonight

Rock me mama anyway you feel

Rock me mama like the wind and the rain

Runnin' from the cold up in New England

My baby plays the guitar

I pick a banjo now

Oh, the North country winters keep a gettin' me down

But I ain't a turnin' back

To livin' that old life no more

Walkin' due south out of Roanoke

I caught a trucker out of Philly

Had a nice long toke

But he's a headed west from the Cumberland Gap

And I gotta get a move on before the sun

I hear my baby callin' my name

And I know that she's the only one

And if I die in Raleigh

At least I will die free

Great Song! and great band! Glad for this post!

We are a bluegrass band...  We've not played a gig in the last 4 or 5 years when this song hasn't been requested.....most of the time more than once.  Oddly enough, we were probably the first group to play it around here and people thought we had written it!!!  No, it's not a traditional bluegrass song but for whatever reason people love it...  They love to dance to it, sing along, etc.  Great song regardless of what you call it!

Interesting pick. I like the song. The OCMS version is the better of the two, imo. It's good to have an easier song once in a while. At least our families and friends might recognize it.

Here I am singing and playing banjo on it along with my musical partner, Mike.

Excellent! I'm taking a Pete Wernick Jam Camp in Nashville. We are encouraged to lead a song in one of the small group sessions. I did Wagon Wheel. I train wrecked it, but still having fun learning the do's & don't's & ways to improve.

Come home to find you'd posted this! Am psyched as with this info I can turn future train wrecks into more successful rides. wahoo!

Love the OCMS version. Was the 1st song I played with my cousins when we attempted a little jam session at our family reunion. It was the one song that all ages, from itty bitty to 80s, , knew. If they didn't know it they caught on pretty quick.

My favorite version of this song...