Please note this is an archived topic, so it is locked and unable to be replied to. You may, however, start a new topic and refer to this topic with a link: http://www.banjohangout.org/archive/297608 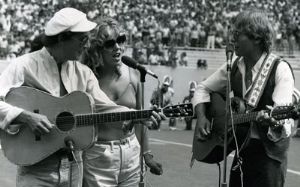 Most of the song was written by Bill and Taffy Danoff (they were married at the time--Taffy later become Taffy Nivert), a duo called "Fat City" who used to open for Denver at the famed Cellar Door in Washington, D.C. Here's a good interview with Bill's perspective on the song.

The story of the song's genesis goes like this: they wrap up their set on December 22, 1970... John breaks his left thumb in a car wreck that night... he's wired on drugs... the duo introduce the song to him... and the three of them work on completing it until 6AM.

The Danoffs were hoping to sell the song to Johnny Cash--they almost didn't play it for Denver because they didn't think it fit his style.

The song was premiered live December 30, 1970, during an encore of Denver's set, the singers reading the words from a folded piece of paper. This resulted in a five-minute ovation, one of the longest in Cellar Door history.

John Denver released it on his 4th album, "Poems, Prayers and Promises" in 1971 with the Danoffs singing backup. It hit #2 on the Billboard Hot 100.

West Virginians love the song, of course. It's one of their official state songs in fact. Oddly enough, various sources I've read say the Danoffs and Denver hadn't been to West Virginia before writing the song.

Usually played in G, although Denver recorded it in A.

Life is old there, older than the trees

To the place I belong

All my memories, they gather 'round her

Dark and dusty, painted on the sky

Misty taste of moonshine, teardrops in my eyes

I hear her voice in the mornin' hour she calls me

The radio reminds me of my home far away

And drivin' down the road I get a feeling

That I should have been home yesterday, yesterday

There are a couple of tabs in the archives, but the 1st one is awful. The second is one from Jay Buckey which is a fairly straightforward, but good, version.

The best tab I have encountered is by Jack Gentle (MickG). As ever, he produces great tab. Thanks again Jack.

So the song is really about the Shenandoah Valley in Virginia since the song writer was geographically inept and now it is the state song of the wrong state?  I always wondered why it referenced the Shenandoah when only a tiny fraction of it is in WVA.

“Danoff says some of his late 1960s excursions to Western Maryland with his girlfriend provided the genesis for the song, as well as a subsequent trip down Interstate 81 on his way to Roanoke, Va.

Here is my attempt at this tune. I got the tab from Russell Sawler.

Special Concensus has this song on their Tribute to John Denver album,released in 2012,I think. Greg Cahill's version uses a lot of simple alternating thumb rolls throughout.

Special Concensus has this song on their Tribute to John Denver album,released in 2012,I think. Greg Cahill's version uses a lot of simple alternating thumb rolls throughout.

Hi there, I wish I was that good.

First met the Danoffs back in '73 or '74. Don't remember where and John back in '69. I worked it up on guitar soon after I heard it the first time, but only converted it to banjo about five years ago. Here's my version with my Deering goodtime classis tuned in D with a wound 3rd and 4th.

The deeper and full sounds of the D tuning really work out here. The melody kept to what everybody and their Uncle are going to want to hear. I want to comment and compliment you on your vocal interpretation. You have a professional timbre and timing that I would guess on a bet you sang many songs in a few bands. Well done, well done.

First met the Danoffs back in '73 or '74. Don't remember where and John back in '69. I worked it up on guitar soon after I heard it the first time, but only converted it to banjo about five years ago. Here's my version with my Deering goodtime classis tuned in D with a wound 3rd and 4th.

Great Job, Gary, You have a great voice.