Please note this is an archived topic, so it is locked and unable to be replied to. You may, however, start a new topic and refer to this topic with a link: http://www.banjohangout.org/archive/296847 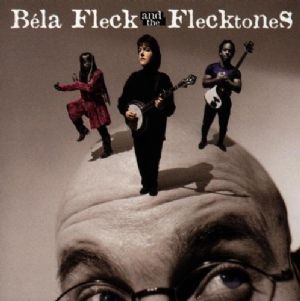 Béla Fleck and the Flecktones'


This week we're featuring our first Béla Fleck tune in our tunetorial series. I thought "Big Country" would be fitting since it seems to be Bela's most popular tune among banjo players.

Released on Béla Fleck and the Flecktones' "Left of Cool" album in 1998, "Big Country" won a Grammy that year for "Best Pop Instrumental." It's got a very recognizable and memorable melody--one of those "earworms" that stays in your head after you hear it.

Of course, when it came to Béla he wanted to make sure he remembered it--so he called his home answering machine to record it. Here's how he explains it (from their "Live at the Quick" DVD):

"Big Country is one of those tunes that sort of just arrived, done, in my mind. And what I do when that happens is I call myself, I call my machine at home and I sing the melody... uh... and I can't... I'm not... I shouldn't be singing in the first place but it's just the only thing I can do, the melody's gonna be gone... in another minute it'll be gone. That's the nature of composition, there's this inspiration factor and then there's craft. So how do you take that inspired moment and make it into something that's complete and makes sense all the way through?"

Interesting fact: Béla Fleck has been nominated in more categories than any other musician in Grammy history.

One last note: this "Big Country" shouldn't be confused with Jimmy Martin's "Big Country" which has been recorded by lots of big bluegrass artists. Two very different tunes!

Typically played in E, with the banjo tuned down to open E.

I loved this tune ever since I heard the Flecktones do it.  I never  understood the timing completely until now.  Here's my go at it.

This is also one of my favorite Béla tunes, because it's attainable. The timing takes a while to figure out, but once I cracked the secret -- to count most of it as 6/4 time (6 beats per measure) with some 4/4 interspersed in specific places, then I was able to tackle it. Part A goes back and from from 6/4 to 4/4 time signatures, and Part B is all 4/4 time. The trick is counting in sixes. One you can wrap your head around that, the rest ain't so bad...

Here's my half baked attempt at it recorded solo early in the morning almost 5 years ago. A little sloppy and the recording is very very hot. It is what it is.

This is one of those tunes that's been difficult for me to interest anyone else to play to work it up. I remain hopeful that I will still meet up with the right musicians soon, if I haven't already :)

Fine takes on that Doug and Frank.

Yes it is available in Tabledit...I tabbed it out years ago but never found it worth fooling with other than how Bela plays it. Casey's video is worth watching and she plays it really well...Jack  p.s. lots of time changes for those brainy players

Oh and yes, tune your banjo down to E. Many find this song fascinating so it's certainly worth learning...Jack
Originally posted by Jack Baker

it is available in Tabledit...I tabbed it out years ago but never found it worth fooling with other than how Bela plays it. Casey's video is worth watching and she plays it really well...Jack  p.s. lots of time changes for those brainy players

Here is Dan Walsh playing both a 3 finger and clawhammer version:

Hangout member Colin Knight teaches a generic version of Big Country in this YouTube video. He's tuned in standard G, but he acknowledges up front that the tune is usually in E.

This lesson is geared toward the intermediate-to-advanced player, because while he breaks down several of the passages note-for-note, he doesn't do that for the whole piece.  Rather, he plays each phrase several times, shows you where he is and leaves it to you to get what he's doing.  He also shows you places for your own variation and improvisation -- since Bela improvises on this piece a lot (as demonstrated in the "workshop" video in Eric's original message).

Jack, do you have a link to the tab for Big Country you mentioned above?

There is a tab and .tef of this in open G (so in Tabledit  it is not tuned down) in the tab archive here on the Hangout.

It is pretty much the same version that Casey Henry plays except that it is not tuned down (in any case, your fingers play the same frets whether you're in open E or open G). Neither has the high single note 'coda' that Casey plays in her version and the tab has a different short 'coda' part that the .tef file does not have.

No I don't have a link to this tab as mine is just paper tabbed for teaching...This song is all over BHO and the internet so it shouldn't be too difficult to find...good luck...Jack   p.s. much of my paper tabbed material will never appear in Tabledit if I use it for teaching privately....pps. many of my private students aren't as interested in this particular song as most of the people on BHO are...I don't know why but other than how Bela plays it, I've never been that interested in it as a composition...

No offense to anyone, but all this just shows really how good Bela plays it. Anything less is just, well, you know dang

Of all the versions in the BHO Tab section, which one is it?

The TablEdit version is called Big Country (Bela Fleck) with a note: As played by Bela Fleck in 'Left of Cool' (studio version) posted by darbard.

The tab is under Bela Fleck Big Country (so not just Big Country). There are two PDFs but it is the second one that has the bulk of the song. This was posted by Jodebanjo.