Please note this is an archived topic, so it is locked and unable to be replied to. You may, however, start a new topic and refer to this topic with a link: http://www.banjohangout.org/archive/295974 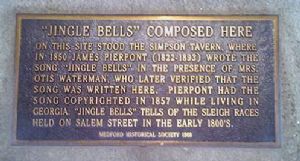 
I realized, possibly a bit late, that we should have featured a couple of Christmas tunes for our tunes of the week!

According to the Wikipedia article, Jingle Bells was actually originally written as a celebration of the American Thanksgiving! It told the story of sleigh races held on Salem Street in Medford, Massachusetts in the early 1800's.

The song was written by James Lord Pierpont in 1850 and originally entitled "The One Horse Open Sleigh." Pierport was a New England born songwriter, arranger, organist, and composer.

More interesting trivia from Wikipedia: "Jingle Bells" was often used as a drinking song at parties: people would jingle the ice in their glasses as they sung. The double-meaning of "upsot" was thought humorous, and a sleigh ride gave an unescorted couple a rare chance to be together, unchaperoned, in distant woods or fields, with all the opportunities that afforded. Sleigh rides were the nineteenth-century equivalent of taking a girl to a drive-in movie theatre in the 1950s and early 1960s, so there was a somewhat suggestive and scintillating aspect to the song that is often now unrecognized.

Typically played in G--this tune is pretty popular among banjo players because the melody notes lay out so nicely on the banjo.

Wow, much as I love banjo, Stewart Duncan's fiddle break in that Nashville Bluegrass Band version of Jingle Bells is just friggin' wonderful! Wow. Banjo is great too.

BTW, does anyone know the make of the banjo being played in the Nashville Bluegrass Band version of Jingle Bells?

Earl's version of Jingle Bells is still the best version to me. Earl never lost his touch, even in older age...He was the best ever...Jack

BTW, does anyone know the make of the banjo being played in the Nashville Bluegrass Band version of Jingle Bells?

Hard to tell from the video, but I've seen O'Bryant playing a recent (1990s?) Gibson reissue RB-5. That might be what he's playing in that clip.

I'm having fun mixing various arrangements on this tune. I had previously learned the verse from Ross Nickerson's tab posted here so I learned Casey's arrangement of the chorus to go along with it. Casey's version has pinches which adds variety and maybe sounds a little more Christmas like. I listened to Earls video where they use what i think Pete Wernick calls "Taters" for the kickoff so I stole that and added it on to mine.

I probably should be splitting firewood or something but this is way more fun. Ha!