Please note this is an archived topic, so it is locked and unable to be replied to. You may, however, start a new topic and refer to this topic with a link: http://www.banjohangout.org/archive/294944 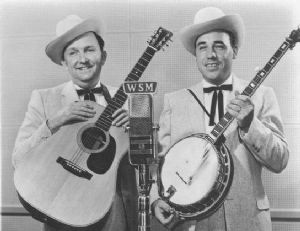 Flatt & Scruggs released their first version on a 78 rpm single for Mercury in March 1951. It has since been recorded by The Country Gentlemen, Jim & Jesse, Nitty Gritty Dirt Band, Red Smiley, Del McCoury, The Bluegrass Album Band and many others.

This is a traditional tune credited to Frank Southern on Flatt & Scruggs' recordings. The earliest known publishing of the lyrics, though, are in an 1882 book titled "A Collection of Revival Hymns and Plantation Melodies" by Marshall W. Taylor, D.D. (See this tune on page 75 here). In that book it's credited to a "J. Courtney."

Typically done in G or A (or of course G# to match Flatt & Scruggs).

It will stand the raging storm

It will bear my spirit home

But pray night and day or you'll sink in the deep

Fathers and mothers are praying so well

Saying Lord won't you take us in your lifeboat?

The clouds are so heavy, the winds are so loud

The thunders are rolling, bursting the clouds

They pray to their sinner mates for what they have done

They took the dying sinner in their lifeboat

Great song to play and sing!  Here's my attempt at JD Crowe's kickoff to this one from the Bluegrass Album Band recording.  I am using tab purchased from Russell Sawler at bluegrassoutlet.com

I've put J.D.'s version on several times. I even sent it to Eric for further posting...almost the same break which is why I didn't include it in this week's TOTW. I must admit I don't know much about Russ' tabbing work...Jack p.s. keep up the good work Bryan

Great song to play and sing!  Here's my attempt at JD Crowe's kickoff to this one from the Bluegrass Album Band recording.  I am using tab purchased from Russell Sawler at bluegrassoutlet.com

Hi guys. Good song and good job Bryan. In my experience Russell's tabs are spot on. I purchased his Classic Solos tab book which includes every one of DJ's  intros and breaks for all six of the Bluegrass Album Band's CDs. Although I haven't tried them all, whenever I run a song thru Song Surgeon or Capo, the tab tracks the song note for note. I've not met Russell in person, but have communicated frequently via email, and he is a very nice man, not to mention very talented.

Here is some more background info:

Mainer’s Mountaineers recorded this song for Bluebird/Montgomery Ward in 1935 as “Take Me Into the Lifeboat”. This song was found on the B side of J. E. Mainer's Mountaineers’ 1935 hit MAPLE ON THE HILL.  Lester Flatt, Earl Scruggs & the Foggy Mountain Boys released a version (recorded under the title “Take Me Into the Lifeboat” in 1950) on a 78 rpm single for Mercury in March 1951 (Mercury reissued the song for their 1963 album The Original Sound, for the 1968 Flatt & Scruggs album Original Theme from Bonnie and Clyde, and for the 1974 album Lester Flatt & Earl Scruggs, the Foggy Mountain Boys; Collector’s Classics for the 1976 Flatt & Scruggs album The Vintage Years, Volume II; Rounder Special Series for the 1985 Flatt & Scruggs album The Mercury Sessions Volume I; Bear Family for the 1991 Flatt & Scruggs box set 1948-1959; Mercury for the 1992 Flatt & Scruggs album The Complete Mercury Sessions; Universal for the 2001 album 20th Century Masters: the Millennium Collection: Flatt & Scruggs; Mercury for the 2003 Flatt & Scruggs album The Complete Mercury Recordings; JSP Records for the 2003 compilation box set Selected Sides 1947-1953, and Proper Records for the 2004 box set A Proper Introduction To Lester Flatt & Earl Scruggs).  Flatt & Scruggs released the song again for their 1959 Columbia gospel album Songs of Glory and on a EP in 1960 (Columbia reissued that album in 2005 under the same title, Bear Family reissued the song for the 1992 Flatt & Scruggs box set 1959-1963, and Music Mill reissued the song for the 2002 Flatt & Scruggs album Father’s Table Grace).  The Country Gentlemen recorded it for Rebel Recording Company in 1969, when it was licensed by John Duffey & Eddie Adcock (BMI/ZAP Publishing), and released it for their 1969 album Play It Like It Is (Rebel Records reissued it for the 1998 Country Gentlemen box set The Early Rebel Recordings: 1962-1971).  Jim & Jesse later recorded it for Old Dominion Records in 1983 (Pinecastle reissued it for the 1999 Jim & Jesse album The Old Dominion Masters).  Among others, the Green Valley Boys released the song on a private label EP in1953, Carl Story & His Rambling Mountaineers for their 1959 Starday Records album America’s Favorite Country Gospel Artist as “Life Boat” (the Spin-O-Rama label reissued that album in 196? under the title Old Time Religion by Fred Starr & His Mountain Boys), Wade Mainer and the Pleasant Valley Boys on a 45 rpm single for the Knob label (date unknown), Red Smiley & the Bluegrass Cutups for their 1967 Rural Rhythm album Red Smiley and the Blue Grass Cutups (Rural Rhythm reissued it for the 1998 Red Smiley album 20 Bluegrass Favorites, Volume II), the Bluegrass Album Band for their 1982 Rounder album The Bluegrass Album (Volume II) and for their 1986 album The Bluegrass Compact Disc (Rounder reissued both albums in 1998), Jim & Jesse for their 1983 Double J label album Homeland Harmony (Pinecastle reissued it for the 1991 Jim & Jesse box set Old Dominion Masters), Rose Maddox for her 1983 Arhoolie album Beautiful Bouquet, Chief Powhatan for his 1984 Mountain Laurel album More In 84, the Country Gentlemen again for their 1991 Rebel album Let the Light Shine Down, the McClains for their 1999 Pinecastle album More Fun Than We Ought To Have, George Shuffler & James Alan Shelton for their 2000 Copper Creek album The Legacy Continues, Jim McCall & the Walker Mountain Boys (a reissue of old Vetco Records material) for their 2001 Crosscut Records album Walking with Him, Red Smiley for the 2001 Rural Rhythm compilation 24 Old-Timey Favorites, Nitty Gritty Dirt Band for their 2002 Capitol album Will the Circle be Unbroken, Volume III, Dave Evans for his 2002 Rebel album Hang a Light Out for Me, and Wild Blue Yonder for their 2003 (no label) album Bolt Out of the Blue.

A great, old, bluegrass gospel favorite. I need to to learn the words to all the verses.

Still loving the TOTW (BG) series. Keep it up!