Please note this is an archived topic, so it is locked and unable to be replied to. You may, however, start a new topic and refer to this topic with a link: http://www.banjohangout.org/archive/294799

Hey folks, for this week I'm submitting Calico's Corn, a D-tune from Dear Old Illinois, the collection of tunes and songs collected from Illinois and gathered for publication by Garry Harrison & Jo Burgess. As has been noted a few times on the various hangouts DOI is set to be re-published sometime soon. I'm sure it will be well announced when it actually shows up. 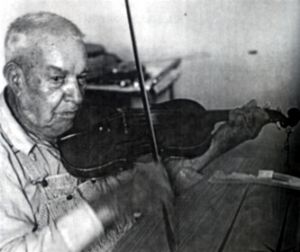 Here is the information on Calico Corn from Dear Old Illinois

"A farmer who lived outside Oakland when we first met him Mr. Ingram later moved into the town of Hindsboro.  He was another of the numerous fiddlers we encountered who had not played the fiddle for years but was happy to give it a try.  His style was a rhythmic one, and he mostly favored series of short bow strokes over slurs."

I first heard Calico Corn from my fiddler friend Steve Staley. As soon as DOI was published (2008 I think), three of us got together and did an order. Steve then had gone through tune-by-tune playing them to see and hear what we had. The next time we played together he said that he was really enjoying "Calico Corn," and played it for us. We agreed "Good Tune" but somehow never quite added to the tune bag.

Since that time I had occasionally gotten to play along with the tune, mostly with the crowd over at Urbana/Champaign, or Bloomington/Normal, or at the gathering in Battleground or the smaller one in Gilman. But still, I could never recall it, and even forgot that it was included in the Billy Mathews collection of tunes which I have on semi-permanent rotation on my mp3.

Finally this October at the Illinois Fiddle Contest in Effingham I asked Chirps Smith to join us as we sat around. He was down from Wisconsin to be one of the judges. The first tune I asked for was Calico Corn, and for some reason it finally seems to have stuck with me. I can almost always recall how it goes--and once you know how it goes it plays pretty easy on the banjo in regular Double-D tuning.

The tune doesn't show up much online, but I hope we can change that.

The Old Town School of Music has two versions available. Here are direct downloads of one slow by Paul Tyler:

And one up to speed by Chirps and friends: oldtownschool.org/fiddle/fun/c...n5503.mp3

And I'll attach two other versions. One is a 20-second excerpt from Billy Mathews' 500 tunes project (a great source), and the other is a recording I did earlier this month in my office. I've been out of town for the past week and didn't have time to do a video. I'll probably add one tomorrow.

Edit: Last night I got my copy of Dear Old Illinois back from she to whom I had leant it, and find that the title is given as Calico's Corn, so I've edited the title of this topic. Also, Ive added the scan of Gib Ingram with his fiddle.

Thanks for all the work you put into TOTW. Most enjoyable for me (and I am sure many others) to learn the history and old time players. Research I would not have taken on by myself. Between you and Janet B my banjo horizon keeps widening.

A good tune choice, Erich, and in time for Thanksgiving.  I like your version with its rhythmic slides and comfortable setting.

Chirps Smith of course reminds me of Rhys Jones, and though I've heard Rhys, this is my first taste of Chirps' fiddling.  It's great.  I listened to the slowed down Paul Tyler and then to Chirps. Janet, I like what you do in the 4th measure of the A part. If you ever get a chance to attend a Lynn (Chirps) Smith workshop, you'll enjoy it.

hendrid and Dock: One of the things I'm interested in is what this tune might be related to. When you get these tune that are apparently associated with one source--where did they come from. Or are they just different names for another tune. My first TOTW entry was Straw Bonnet, also in Dear Old Illinois from the prolific fiddler Harvey Talyor,  although I learned it from Chirps' mandolin version on one of the Indian Creek Delta Boys albums. Since then LyleK has pointed out to me that Straw Bonnet is hard to distinguish from the somewhat more common "Rocky Mountain Goat."

I'd like to know more about Dear Old Illinois, Erich.  Do you have a book and CDs?

Here's another tune with a related title, but not melody, taught to Rhys Jones by Chirps Smith called Indian Corn, as played by Bigfoot Stringband:  youtube.com/watch?v=_o_-8Ji3UCE   Could it also be one in Dear Old Illinois?  How many tunes are in the book?

vrteach:  I like to think sometimes that there are really only a few dozen tunes and all the rest are just variations of these, to a greater or lesser extent.  But, that just sounds too simple.  Boy, what a messy job classifying THOSE tunes would be!

I'd like to know more about Dear Old Illinois, Erich.  Do you have a book and CDs?

Here's another tune with a related title, but not melody, taught to Rhys Jones by Chirps Smith called Indian Corn, as played by Bigfoot Stringband:  youtube.com/watch?v=_o_-8Ji3UCE   Could it also be one in Dear Old Illinois?  How many tunes are in the book?