Please note this is an archived topic, so it is locked and unable to be replied to. You may, however, start a new topic and refer to this topic with a link: http://www.banjohangout.org/archive/292381 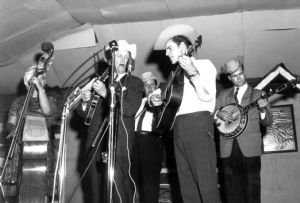 
This week's tune is an old-time instrumental Bill Monroe popularized when he recorded it in 1963 with Bill Keith on banjo. The tune is also known as Salt River, but was renamed on Monroe's recording. Some say it was because the record company though it would be confusing having two tunes released near each other both ending in "river" (Big Sandy River was the other) and some say Monroe renamed it after a creek that runs near his Bean Blossom festival site.

Played AABB, typically in the key of A.

Here is a break to "Salt Creek" that Bill Emerson showed me.  Start at 2:29.  It is a short segment played slowly.  youtu.be/fT0xgMGwgro

Here's my version, with a whole break played alternate-picking to emulate a tenor banjo, complete with triplets.

... and here's one from me, a little different, as it's played in the key of C in double C tuning, and on the slow side, which is inspired by Beppe Gambettas Slow Creek.