Like everyone, inflation takes whatever gains we make. We just have to spend more time on the hamster wheel now.

I've had Cripple Creek and FMB down for a while, as far as down I mean I play the whole thing from begining to end as in the video. When I try to speed it up I get sloppy, my fingers are not tense or anything my hands are not cramping up on me. It's more like a miss strings or hit the same one twice? Should I just play it slower with a met and slowly increase the met speed?

I like to work on one "verse" as opposed to plating the whole thing through to help increase speed. Once you can get a verse sped up, the rest will be easier to do. Enjoy!

Is that you? Now I know that is good information. I was just contemplating going over there the other day after work to have you take a look at my banjo and discuss taking some lessons that is if you have time for another student? How are you doing these days? Practicing one verse I think is a good idea except for anybody left in the house that is forced to listen to it over and over LOL.

Thanks Rob. I've been playing for nearly three weeks now and have pretty much got Cripple Creek down. I just need to work on my speed now. I've been looking at Man of Constant Sorrow, which I can play bits of. Would you say that this was easier that FMB or should I concentrate on this first/

thank you so much, i just got cripple creek through some dude by the internet, thought it was a nice time to move on to something a bit harder, and then you came along! thank you so much for doing this

Thank You. I have been working on prolly 6 other versions of Cripple Creek, now I can play with your version, which is entirely new to me.

A HUGE Thank You to you Rob for sharing your expertise in the form of the YouTube Videos. I was struggling and about to give up on Tabs until I stumbled on your Videos and after a couple of months of practice, practice, practice as we say here in Packer land, I can now make my banjo actually sound like a banjo. Again, Thank You. There might be some hope yet for this retired banjo newby from the U.P.

Thanks for the kind words everyone. I took some work as an artist development man for a record label a couple of months ago. It has involved a lot of travel and a lot of studio work. Even my time off has been filled with a lot of listening to pop music. I unfortunately haven't had a banjo in my hands for more time than it takes to teach a Skype lesson and prepare a private video. Then, it's back to the work.

I just wrote a banjo tune though, and it will be a good intermediate exercise. I will post it at the end of the month if I can. I have promised myself not to do so until I finish editing the rest of the banjo vids I already have recorded.

Life is so crazy. I would love to just sit back, make free videos and answer questions as well as I can for those who need help, but I have been a full time musician all of my life. My wife has also been a stay at home mother, so this has meant a lot more work than I might have done, had I worked a real job.

For the hotshots who will contend that music is a real job, they have obviously never dug stumps for a living. I am blessed to do what I do. Just a bit too busy for everyone else's liking right now.

I need a vacation though.

hey rob i came up with this crazy new invention, I call it Jokeinthe box.
its a box about 4 feet high and sits one muscian that can play any song any instrument.

all you have to do is when your so busy you cant think straight, you just go and open the jokeinthebox

and out pops a musician whos realy to play anything on a moments notice.

all you have to do is make sure its fed and watered and gets nights out of the box to cruise the clubs,

and then it goes back into the box for another day.

Forgive my ignorance, but can i download this video as one thing or do i have to click on each link seperately?

Thanks for sharing this!

Hey Rob i have been playing Banjo since 2007 and i play a Banjo Guitar Dobro Mandolin and Fiddle my grandpa played the banjo guitar and fiddle but Smostly the banjo since 1985 and he died in 2008 he loved Flatt and Scruggs,Reno&Smiley The Stanley Brothers he played Foggy Mountain Breakdown but i never got to learn from him to play that and the banjo so i had to teach myself and now i can play FMB slow but i haven't learned the full thing yet but im gonna practice love the videos thanks for linking them

Rob needs to set up a website with video lessons, i'd happily pay for the lessons!. There's something about Rob's teaching style in this FMB video which really worked for me. Many thanks from across the globe!

Several months back, I took a position with NorthStar Media, doing studio production and arrangement, so I have been very busy with recording, instead of working on videos.

I am just wrapping up a two week session in Nashville as well, recording an album with Drake Bell, (The Drake and Josh Show.) Drake is a very talented musician, singer, songwriter as well as a nice guy.

I was given a chance to do the project by producer Peter Collins and executive producer, Brian Setzer (Stray Cats.) Brian is also playing on this album, which is a great treat for me, being a fan. Chad Cromwell is on drums and Dominic John Davis on bass, so I am completely humbled to even be a part of this, considering the combined talents have performed and recorded with the best in the business.

No banjo on the album, but I hope to be back to tricks when I get settled back into my routine at my little studio back in Michigan.

God Bless all, and sorry to go missing, 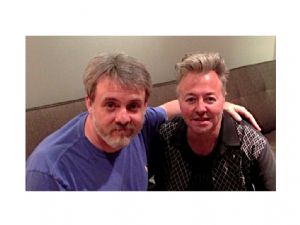 good for you rob. dont change a thing

Glad to help Kevin. I wish the summer would have allowed me to do a little more work on the banjo. Here's to getting more done this fall.

Rob you are a very kind person, thanks great stuff