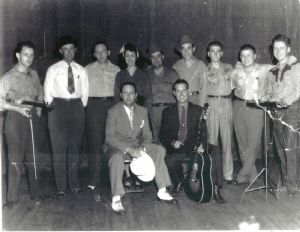 How many can you identify?

Im not very good but I see Monroe, Flatt & Scruggs. Who are they all?

wow, is that guy 2nd from the right the one that played in the stanley brothers' band for a while? bass fiddle.. forget his name.. chick stripling maybe? they had so many clinch mountain boys i git 'em all mixed up..

besides that i can only recognize earl.. i see two guys who could be lester and i only recognize bill cause he has a hat in his hand.. most pics i've seen of him he was much older..

Bill, Earl, Lester, Chubby, Chick...that's all I can recognize.

What a great shot, Wayne...I'm guessing Clyde Moody seated with Bill (but he almost looks like Jimmy Martin), Jim Shumate on the far left, Chubby Wise right in the middle, and is that the solemn judge next to Lester? That's all for me....Thanks for this!
Mac