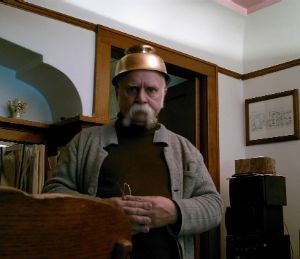 Does that thing protect you from Alien abduction, if so, where can I get one? I'm so sick of them damned Aliens, they keep interrupting my banjo practise.

Guy, you need a psychiatric nurse (like me!) Mike, love your hat, must have one. Lyndsay

I've got a small one kinda like that. I got it because it rings like a bell - really neat. Unfortunately, or maybe fortunately it doesn't fit.

Watch out for those windmills... uh... I mean, giants. Tricky  devils. Regards  to Sancho.

You look frustrated. Was your top hat in the shop?

I'd like to be more like you. I take myself to seriously most of the time. I enjoy your wit and wisdom and look forward to much more.

Don't go outside in a thunder storm with that hat on!

...and I thought the Golden Helmet of Mandrino was just another fiction of Cervantes.

Mike, I think you look a little like, not Dennis, but the guy in the move, Back to  the Future. :=)

Mike, if they bring back the Fu Manchu movies, you could audition for the lead.

Are you the guy from "orange county choppers"?

No. He could probably lift me, one-handed.

Mike, during the filming of  The green mile.

During trhe filming of "The Green Mile", who???

Sounds like the third line of a "Knock Knock" joke.

Sit down son, while we fix these electric things to yer leg. Keep yer hat on and wait till we fix the wire to it.

A golden helmet for a golden head.   You beat me to the wooden shoe like to play banjo. Orange you going to?

Looks like a Kaiser helmet...missing the spike on top.