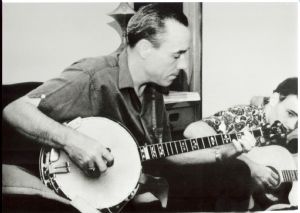 A group of pickers from Chicago and points North was heading home on Labor Day weekend, after the Fincastle festival, and decided to stop at the Scruggs's house in Tennessee. By chance, Mr. Scruggs was home -- he reportedly said that it was the first Labor Day weekend in years that the Foggies were not booked -- and welcomed them in. They jammed a bit, and the photo is of Earl playing the banjo that I acquired later, in February 1967.

VERY cool!  Thanks for sharing this!

Jeez! Do you still have that banjo?

Yes, I still have that banjo, a ~1930 model 6 Gibson flathead.  The neck in the photo was made by Tom Morgan.  I am now using a neck made by Monte Hendricks.

What a great photo.  A great piece of history to go along with your banjo.

And you may have noticed that Steve Huber propped up the photo of Earl and my Gibson, and then struck the same pose when he (Steve) was playing my banjo.

That is awesome! I bet u get goose bumps when u play that banjo and think of Earl picking on it :D