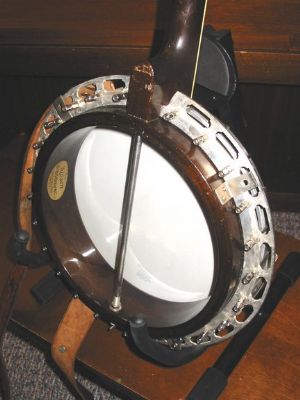 Without knowing anymore about this banjo, I'd say it's a style 2.  An early one, about 1933 or so.  If it is in fact an early one, it will have the fatter rim.  Nice one.

Serial number is 130-10 listed as 1935 TB-2. I inherited it from late father in law who played in a dance band in the 50's. Fingerboard totally worn out- kept original pot and reso, put on Fults TP to replace cheap broken Grover, and used new 5-star tuners instead of worn out originals.

Also replaced neck with a nice played mahogany neck with unique real abolone strip below the fretboard binding. The neck shows some wear, but it matches the mahogany resonator.

'Is this a decent price for a Vega Seeger model?' 2 hrs