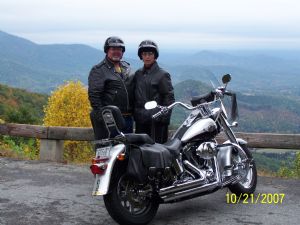 Riding in the weather.

9 comments on “Riding in the weather.”

I see you "riding in the weather", but where is your banjo?  Or, does it come apart and fit in the bag! Mr. LEE

Banjo stayed home this ride.  Actually, I was not playing at that time.  I started playing in Dec of 08 and this was taken in Nov of 07.  Thanks for the comment.

Garry, this was taken in the hills of North Carolina, on the Blue Ridge Parkway.

it looks like it would be a fantastic ride (or drive)through those hills.The west highlands of scotland have similar scenery.what a wonderful world it is mate.do you get out on the bike very often?

Yeah Garry, we get out quite a lot. We have thought of selling the bike though. My wife and I hit a deer in October. We were very lucky and did not even go down. Killed the deer and messed up the bike, but we were safe. Not as much fun after that experiance.

Wow donnie. You and the good lady were very lucky indeed. My colleague hit a dear in his 7 series BMW car and it made an awful mess of the car. You'll probably miss it if you sell it tho and end up with another bike in a few months lol. Old joke= my friend offered me eight legs of venison for 40. Is that two dear?

Keep the bike Donnie. I'm guessing it's an 88 in twin cam.
I keep a 97 Dyna 80 cu in. There are tons of parts avaiable on E-Bay...Fork tubes, fenders and stuff real cheap. Even cheaper off season like winter. Bikes are dangerious...Don't get over your head, never let your guard down on roads and you'll be fine.

You need to post a picture of the Ultra.. I live about 20 minutes from the Blue Ridge Parkway near the Afton Mountain Entrance, come on down sometime and we can ride down to the Dragon...

'Whatâs up with the calendar?' 2 hrs