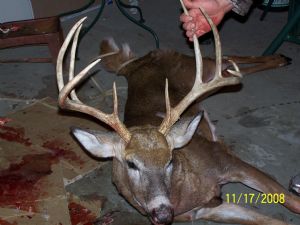 He was very proud.  It was the best he has gotten so far.  The picture does not show the body size very well.  It was a big deer.

Thats a real Big Animal Donnie. Here in the Uk we dont have an abundance of Deer. But we do have Rabbits, and Squirrels, and a lot of Rats. And a horrible Bird called a Magpie that eats all the Songbird Chicks. When we visited Geogia i could not believe how many Deer we saw just running about on the Roads. We saw 2 get hit on a trip up to Atlanta on the 75. No wonder you guys have big Bars on the front of your 4X4s. Have you seen my big Cat on my HP Photos ?

Yea Eddie, I saw that cat, awesome animal. We have great deer population where I live and several each year are of nice size kills.

Great hunting here where we live Eric. My son in law is a true outdoors man.

Nice one! Congrats to him! I agree Rick. Backstraps on the grill. MMMM!

'How to know wood dryness' 9 hrs