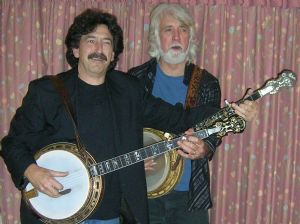 Here's a photo of John McEuen & me playing Foggy Mt. Breakdown. ( Look carefully) In 1970-71, I was a 17 year old kid in the backup band of a guy named Mike Williams, we were the opening act for the Nitty Gritty Dirt Band for a lot of shows, and Steve Martin was also on a lot of those shows. ( We were all being booked by a guy named Chet Hanson back then....they were really magical, times!)John showed me the basic Scruggs roll way back then....I was HOOKED!

Waaaaay cool, Gordon!  What a fun journey you've had!

'I repaired and coordinated my Earth gyro' 1 min