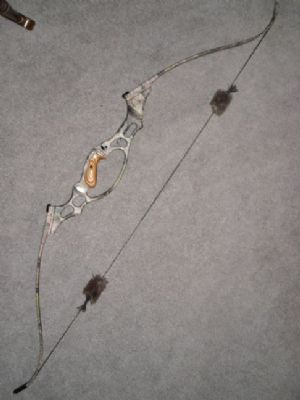 8 comments on “My Hoyt Recurve”

Too cool. I love bow hunting but have never tried it with a traditional style bow. Cool stuff.

Nice bow Scott, what kind of arrow speed can yo get out of it?

Nice bow Scott. I shoot with a couple of fellas who use these. I nearly got one myself until I went to the dark side.(compound)

Hey fisher I really don't know what kind of arrow speed I get.I've never really thought about it with my recurve, thats the nice thing about it everythings more simplified,no release aids,no sights,no worrying about distance, just pull up and shoot. take care.

Hey colin, the guys I shoot with call compounds a bow with training wheels......LOL. I say to each his own, by the way do you ever get on the BHO chat? I'm on there a good bit. Mybe I'll see you there some time.

Hey Colin, I think a mic is all you need, get on and check it out some time.