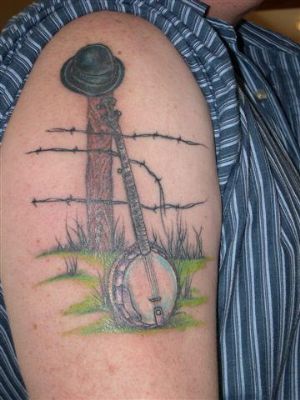 Hey chip, i had a banjo and i just got to say, those strings really hurt when they are going on!

Hey Chip, Cool Tattoo, if you get a chance check out the one i have on my home page..

I had never considered getting a tattoo, until I saw Yours.

Intresting tribute to Mr. Keys! I'm not partial to tats, but if your gonna have one ,that would be it! God bless, PH

Harry, I was able to show it to Will before he left us and it brought a big smile to his face. He couldn't talk well by that time (brain tumor) and when he wanted to see it again he said "too-too"! Since then Tish and I have called it my too-too.

Thats an awesome tattoo!!! I might have to get me a cool banjo tat

That's great. When I was in the Army a long time ago I got a tattoo, I thought it would be my last, but I'm starting to reconsider.

Now that you have lost all that weight, what does that tatoo look like? I do like the picture - the colors are awesome - but I personally would not get one.