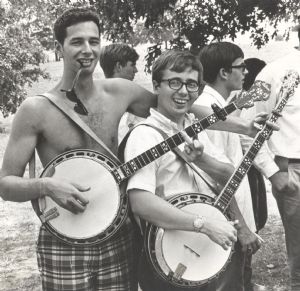 F chord at Fincastle 1966. Rick Riman is on the left, playing the model 6 Gibson flathead that I acquired 5 months later, and I am on the right, playing Rick's model 6 flathead. His banjo was a top-tension model 6, undoubtedly an after-market modification (although with prewar Gibsons, who knows). The photo was taken by Richard Faverty, a wonderful photographer and aspiring banjo player. I understand that he has moved on to other things in the decades since.

I love the "barre" chords

That is the infamous F demented chord.