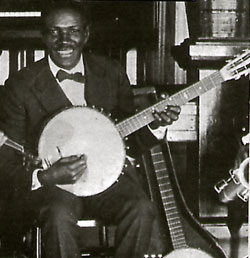 I have had the opportunity to talk to a number of folk who were able to talk to Johnny. He always considered himself a guitarist and not a banjoist. In New Orleans, in the 1910 and up to around 1918, the guitar was the preferred rhythm instrument in the bands that evolved from ragtime to Jazz. Despite the massive use of that instrument by James Reese Europe in his orchestras and bands in New York starting around 1912, the tenor banjo came3 into the Jazz world mainly from white dance bands, and probably gained a place due to the bad acoustics, lack of amplification, and other problems of venues, and the small guitars available both for recording ande venues.

While Black bands from other parts of the country added the tenor, New Orleans bands tended to have their guitarists switch to six string banjo. Of course Johnny was the premier New Orleans six-string banjoist and guitarist. Johnny and other New Orleans six string players like Danny Barker were in the lead in the switch to playing guitar again, once large L-5 like guitars and better amplification first for venues and recording and then for the instrument itself became available. There is a lot of good interview and discussion of St Cyr in Alan Lomax's book about Jelly Roll Morton. As someone who is not exactly a fan of Lomax, that is one of his better offerings

Johnny St. Cyr has become my guitar hero, standing at the crossroads of ragtime style, blues base, "Spanish tinge."