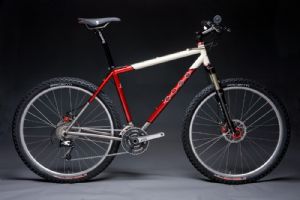 Jim, it should read...Plunka woulda?  I thought about a 650B...Right now, I don't think  enought tire and rim choices are out there.  I will be giving Mr. Kish a call after I pay for my next Hatfield banjo this summer though.  I'm hooked on the 29er's...Love the big wheels!  If they made 650B's in a double-eyelet and welded rim....and there were more tire choices!!!  That really is a beautiful bicycle Jim!

btw, I read about your bike above having a GREAT showing at the Handmade Bicycle Show.  I hope to attend next year.

I don't know much about bkies, but that one is very cool. I do like to ride, however, and right now in New England is the best time for riding.

I was thinking of picking up a Surly Pacer and converting it to 650b for commuting. Does it feel at all sluggish?

The only 650B bikes I've ridden were built by me around that wheel size--so those felt 'correct'. It's a great compromise between 26 and 29, and I'd imagine you could use them on a 26" MTB provided you have the clearance. The BB drop wouldn't be quite right, and the head angle would ideally be a bit steeper, but I bet it'd work out fine.

My conversion would be on a road bike, 700x23 to 650b. I was more curious if the comfort gain is enough to justify the loss of of speed. Essentially this is what I'm thinking:

Although, I'd build it a little differently.

Thanks for the help.

NAHBS reference a few comments up clued me into you being a builder, Impressive.

'picking pattern roll: single string pluck, how to do it' 16 min

'L-Brackets with Round hooks and Nuts sets' 8 hrs