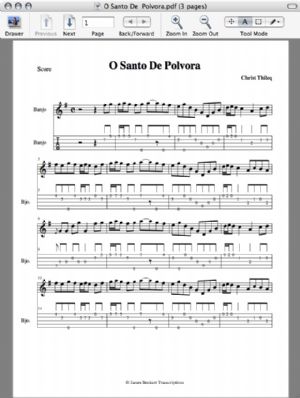 it's on the how to grow woman from the ground by chris thile. and u can listen to it here: http://youtube.com/watch?v=mxFIvGGKSHY hope u enjoy! jim

Brokenstrings wanted to know what  "O Santo de Polvora" means. I don't know why you deleted my post, I didn't mean anything by it other than giving her an answer.

hi banjoman, did i delete your post? i don't even know what happened, so don't worry about having offended me, and i'm sorry id i did. sorry if i didn't answer your question, and thanks for the save banjoman. james

If I had a dime for ever slip of the finger on BHO...I buy a new banjo.

Hey James, An unusual tune, and a nice transcription. Our mando player picked this up from Chris Thile some time ago & we've arranged it for mando, violin, and button accordion. We've slowed it down from where Chris Th. likes it, and it's got a real sweetness. cheers, Tom

I like it a lot. Great choice for a genre breaker like Chris Thile. It also is an excellent example of the fact that there are many different Celtic people's in the world, each with their own influences. The Earliest recording that I know of this tune is from the group Milladoiro, from Galacia, in Northern Spain, which is one of their Celtic "areas" (I can't say nation because supposedly they have to still speak their original Celtic tongue. Under Roman pressure, many "mainland" European Celtic nations had to abandon their dialect.
Anyway, Although it was performed by Milladoiro With the tin whistle as the lead instrument (they also play bagpipes - go figure) I would really like to learn this tune on the banjo and have not had success at picking it out on my own. Help!

'Do I have to buy another banjo to strum?' 3 hrs

'New banjo player if you could give me a hear Iâd appreciate it :)' 5 hrs