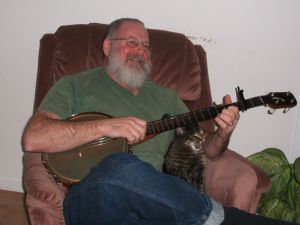 Psycho the cat knows exactly how to tickle Dan's fancy!

Who's that old feller with the banjo!!??

That old fellow is not that old - heck, he's younger than I am and I'm really young!

A Renaissance man, I see.

I hope he's there to get a lesson or two from you. Just look at the way he holds that banjo. And for goodness sake, the resonator has fallen off.

I had a cat named psycho. He died last year and we will always miss him. He was a polydactyl and one of the goofiest animals you'd have ever seen. There's a pic of him on my page. Poor cat never got to hear me play banjo. However, if he had, he may have died earlier than he did.

'Mike Gregory's e-mail account may have been hacked' 3 hrs