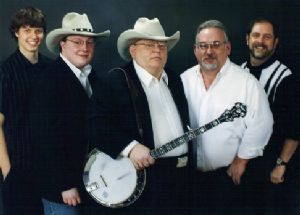 Tell us who those people are. Is that you with the banjo? Is that your son next to you (if that's you)?

Hi Arnold; I'll be glad to intgroduce the guys to you. First I am the one in the middle with the banjo and cowboy hat, my name is Taylor Farley, Jr. On my left, wearing the other cowboy hat is my son, Taylor Farley, III but he is most often called by his nickname "Spud". The fella on my right in the white shirt is, Jerry Clutter, he plays the upright bass. On the far right, in the black with white shirt, is Ed Napier, he plays the drums in the band. And finally the young'n on the far left isn't with us anymore (But was on the album), Mike Reese. Mike left us to go to the college in Boston, Berkely College of Music. We sure do miss him. Mike played the lead guitar, from the Martin D-28, to a Gibson Les Paul, to a Fender Strat. When he joined he was just turning 16, but he fit us perfect. I really miss that kid. We've been together going on 7 years now without the first argument or fight, it's the best band I've ever had.                               Farley

Arnold; Start packin' ! We'd love to have you sometime.