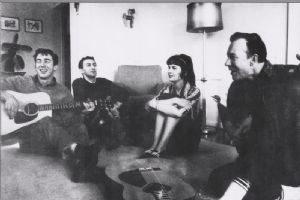 Nice photo of icons for the folk music era; Ian&Sylvia never got their just due as singer-songwiriters as well as interpreters of other better known musicians, Dylan, Lightfoot, John Denver et al. Thanks for identifying Sylvia by her maiden name and not just as Ian's wife and partner.

Sylvia's name at the time of this photo was Fricker. This was taken in Ted's living room in the early sixties. Ted and Ian were organisers of the very first Mariposa Folk Festival in 1961. Ian designed the poster and Ted was the M.C.
Ted worked with my friend Jim Cox's dad and gave me my first guitar lesson (the Carter Scratch) and Jim his first banjo lesson (up-picking).
I got my start at flat picking by copying John Herald and Ian Tyson on the early Ian & Sylvia LPs. They certainly were well known in Canada during the folk boom.

Ian has said that "Four Strong Winds" was the first song he ever wrote (that he kept) and Sylvia's first song was "You Were On My Mind". Pretty strong debuts for each of them.