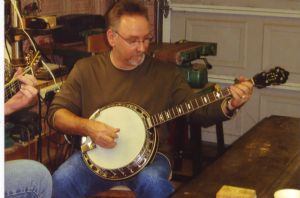 Charlie with his original 5 string flathead #906-2

Oh yeah, baby.....I can't wait to hear Charlie pick this one in person!! What did you think of the neck, Gary? thanks for posting, Lem

Hey Lem, Its one of the best feeling necks I've ever played. Its just like Curtis McPeakes "ole betsy".....which it should be because McPeakes 75 is 906-1 and Charlies is -2. This banjo has never had the first spike put in the neck which tells me its not been play much at all. Just got off the phone with Charlie...he loves those old banjos as much as we do ! Gary

I don't know when I'll get to Nashville next to see Charlie and his new acquisition, but I hope it's soon. Curtis let on that CC had sold his flathead style 3/75 to BF to purchase this RB-75.

Yeah, he's the guy who bought it.. Charlie has another style 3 that is a real monster.

I did get to play all three of Charlie's flatheads, and it was a great experience. All set up by Charlie (of course), yet all unique. I have to say that the RB-3 was my favorite, for whatever reason.