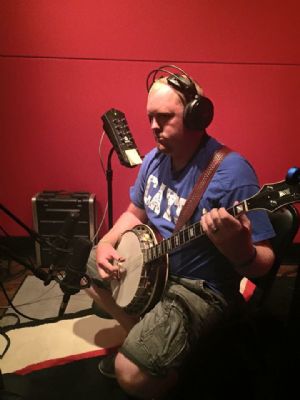 No Robby, that's the face of a nervous wreck. I was trying to record with Ron Stewart at the controls. I had trouble playing in front of that guy!!!! LOL

Brad, I understand that far better than you'd think. I saw Ron a couple weeks ago, he walked in the door where I was setting and eatin' a bite......I was even nervous to eat in front of him! I just can't hardly pick in front of him at all and will try to get out of it anyway possible.......there ain't no way that I could record anything with him within a mile of me! :)

I'm telling you it's been a long time since I've been nervous playing the banjo. Not that I'm any good, I just figure I am what I am and no less and no more, but I really struggled with it a couple weeks ago when we were recording. He's a walking talking legend for sure!!! We cut some really great songs with my favorite singer of all time (the girl who sings in our group), and I'm just hoping I didn't flop enough to hinder it too bad!!! I did enjoy recording with Ron very much though!!! We had a blast!!! He was awesome to us, and wanted the best for our project, I just don't think they got the best outta their banjo player lololol