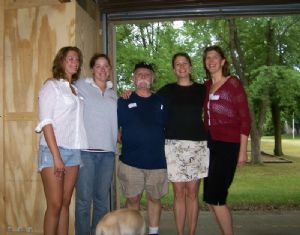 What's that in the middle of those pretty girls?

Looks like four sisters. Your daughters have retained their youth very well.

Ahhh, now I know why all your posts just exude happiness, and here I thought it was just the banjo!

People don't understand what brats and cheese curds can do for you until something like this comes along.

Ann is the one one the right If she didn't throw apple pie at me I would have married her-- What was I thinking??

Must be hard having every lady in the family look down upon you,Mike. ;-))  Quite a bevy of beauties there,Irene must have been very proud.

talk about a thorn between the roses : )

But who is the girl in the middle with the mustache?

If I say she's an Italian from the Distant Relatives side of the family, I risk offending several of my Italian relatives.

'Good gift idea for banjo player who has everything' 1 hr

'Where can I buy a two-feet all maple bridge for nylgut strings?' 4 hrs