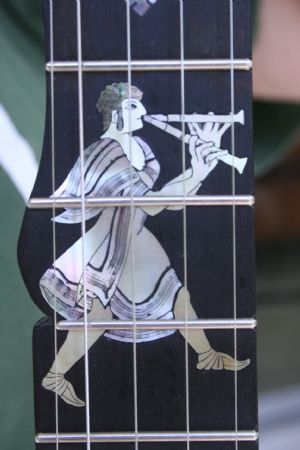 EMB detail: double-flute player from Tomb of the Leopards, Tarquinia.

Wow - that is one beautiful instrument!

The instrument pictured is an Aulos, which had double reeds (like an oboe or a bagpipe chanter)and was very loud. It's usually figured as an ancestor of the western European bagpipes.   What a beautiful banjo!

Waldo, I know it's an aulos, but that covers single as well as double flutes, doesn't it? Cleopatra VII's father was known as Ptolemy Auletes because he supposedly spent all his time playing the flute instead of governing his kingdom.

In Volterra (Roman Volaterrae, Etruscan Velathri) I saw the leader of the musical group Synaulia demonstrate the Etruscan double flute. The flutes were of two kinds: one with both parts of equal length and pitch and one with one part longer and lower-pitched than the other.