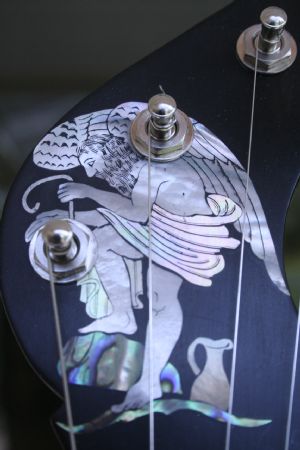 What a lovely banjo, and so well done. Congrats, Jessy. You deserve a wonderful banjo like this one.

Actually, I figure now I need to live up to it!

Great concept and beautiful work! Etruscans and Minoans--two of my favorite ancient cultures.

I really like that banjo! but then again, the old one looks fine to me too.

Oh, it is! It's as sleekly simple as the other is ornate, and it's light as a feather. But it's tuned fully a fourth lower than modern pitch and you can't use it in a workshop or class where everyone else is playing a standard banjo. It's also harder to retune to different tunings, not just because it's fretless, but because the tuners themselves are more cantankerous.

Some of the most ornate, detailed inlay work!
Some one is quite a craftsman.
Beautiful banjos
TD