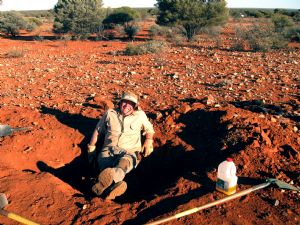 It is. Any special reason that you dug it? And is there a reason you're relaxing in it?

Hello mate,
That pic formed part of a story I wrote on a gold detecting forum and in a national magazine that I wrote for. I am relaxing because I am exhausted. That hole took me the best part of two days to dig chasing gold "found" by my metal detector. The ground is ironstone and as hard as steel (that's how hard it feels anyway). When I got to the bottom all the ironstone was gone and there was NOTHING in the hole. The ironstone, in mass, gave a distinct "gold" signal to the detector but, once broken into pieces, the ironstone gave no sound at all.
As we say, "it was a great earning experience", but I don't want to learn it again. I did find quite a bit of gold by the way, but not in that hole.
Thanks for your interest mate.