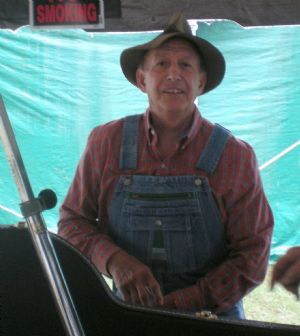 Lester was described by the Tennessee Mafia Jug Band as:

âLonesomeâ Lester Armistead is a shy and retiring retired printer now raising grandchildren on his farm in the Lutonâs District of middle Tennessee. He rarely speaks above a whisper until he uncorks his jug, gets a whiff of greasepaint and footlights, and releases his Force Five tenor voice in song. Lester and his late brother Jack performed extensively in Tennesseeâs Davidson County environs as a country duet years ago. They grew up around the Acuffâs Smoky Mt. Boys, as their dad co-owned a bait store with Acuffâs fiddler Howdy Forrester. Lester learned to sing from Bashful Brother Oswald â on this all music scholars agree. When Lester sings, Oswald lives. Lester blows a jug that Os played on the Opry as long ago as 1939. Lester also picks a mean banjo. Mostly, Lester likes to laugh. When Marty Stuart asks, âLester, howâs your jug?â, the invariable answer is â âbout halfâ¦â.

'Looking for a set of Keith Tuners' 6 hrs