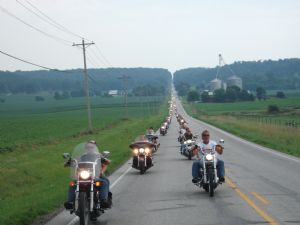 We were leading this 4th/memorial ride.Talk about some rumbling going on! Nothing like the sound of over 100 Harleys!!

Well...its Hwy.56 driving towards Paoli,In.(comimg from Salem,In.)I can't believe this picture turned out..lol..I put the camera behind my head and took it..hahah

Thats not too far across the river