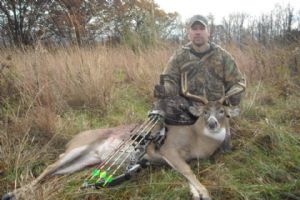 Nice take Scott. You seem to be in your happy place when you are in the field. Now get that banjo out and pick us a tune.

Thanks Donnie, haven't been playing much at all since my wrist problem, it's really frustrating. Now I think it's more of a mental thing from not playing for so long.... But I'll get back at soon,really miss pickin'.

Nice buck. What are you shooting. I use a PSE Dream Evo. Think maybe as a return to picking project you might write a tune called "Buck, bow, banjo & me" Keep on pickin" -GRIN -

Nice one! Seem to be few and far between around here this year. I got the freezer full of doe already though! Love that bow season! Do you know anything about trapping coyotes cause i'm giving it a try this year. No luck so far.

Thanks all, and picKin never got into any trapping but I hear coyotes and fox is the toughest ones to fool. Actually shot my first coyote this year during turkey season, first one I've ever seen, I'll post a pic for ya.

Grumpy1, I was shooting my Jennings trophy master, it's about 9 years old now just can't seem to part with it. And your about the third person that told me I should write a banjo song about huntin'.

If it works, don't mess with it ! Be lookin' forward to the tune - GRIN