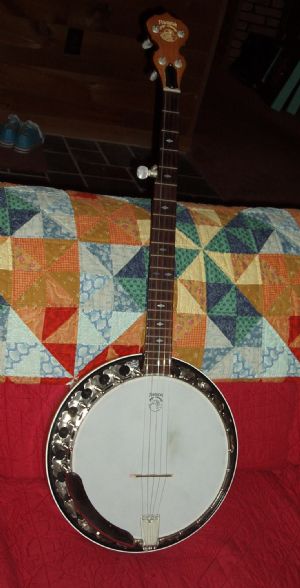 Big Banjo after a good cleaning

All the metal parts of this banjo were covered in a sticky salt-air film. The armrest had a grey green patina and no luster left at all. A little elbow grease later...

3 comments on “Big Banjo after a good cleaning”

JoAnn, Looks nice now. I resurrected a banjo I bought off ebay. A Deering Deluxe. The posted pictures were blurred just enough to cover the real condition of the banjo. I knew the Deluxe banjos are great banjos, so I took a chance and won the bid. For about $500 I won her. Well, when I got the banjo, I couldn't believe its condition. But after some research, hours of cleaning and learning about set up, the banjo works wonderfully now. Your banjo looks like a Deering. I can't quite read the name on the headstock, but it sure looks like it. My Deluxe has similar eagle wing pieces going around the rim. I've removed and polished every one of them, which you probably had to do also to get all the film off. Nice job! Dave Peterson

Dave, this is a 1987 Deering Intermediate, which is no longer made.  I've been told it's most comparable to the current Boston model.  It's a great banjo, and exceptionally easy to play.  But it has a smidge too much sustain, I think.  I need to find out how to fix that.  Maybe just needs a head tightening?

Joan, I happened to check this a few months after you wrote your comment, I am responding well after the fact. Adjusting the head tension might help, it certainly would be worth a try. The sustain might be less if you tried a different tailpiece or bridge. Or perhaps the tailpiece could just be adjusted to give less sustain. If the tailpiece is set close to the head, I I would try backing off the tailpiece with the adjustment screw to see if that helps. The closer the tailpiece is set to the head, the crisper or maybe brighter the tone, and by backing it off, it will become less bright, some would say mellower. If adjusting the tailpiece doesn't do anything to reduce the sustain, then perhaps a different bridge or tailpiece would do the trick. It's hard to say. Anyway, it is fun to experiment. My rule is to start with the simplest things and move to the more difficult if necessary. Good luck!

'When the cell phone is FULL' 2 hrs

'I resemble that remark' 6 hrs