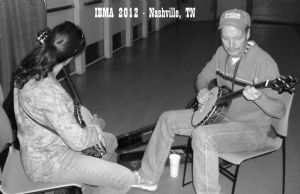 9 comments on “Jamming with Rob Bishline”

So much fun! I'm sorry I missed you.

I know! I was hoping we could have gotten together. I did get to meet Rob and play a few songs with him. Check out my video! :) Not great playing - I was very nervous for some reason and fumbling songs that I know I can play. We'll get together sometime. Hopefully, Terry can be there too!

OK, Terry. I can make the 4 or 5 hour drive to Raleigh and you can hitch a ride with Rob...or fly. Can't you get a deal on airline tickets since you work for American?

Plan now, Terry, and You won't have an excuse to miss it!

I'll talk to Mr. Horton (CEO of AA) and see if he'll let me catch a ride on one of his birds headed to Raleigh.