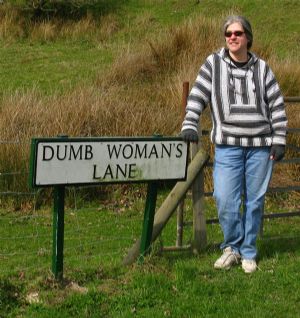 Very intelligent photo Sarah! What part angleterre? have my special family round and in Borehamwood, Herts. michael

My mother in law lives in Herts. We're down on the southeast coast in Sussex. Dumb Woman's Lane is just outside the town of Rye (and Dead Man's Lane is on the other side).

You figure Dead Man's Lane was named shortly after the lady in question found out who first called it "Dumb Woman's Lane"?

And BTW: "Music: It's a world of Herts" might make a good local bumper sticker...

Heh. Dead Man's Lane was where they marched them to execution, or so the story goes. It was once a main path into town. They also drove Elizabeth I's carriage down it when she came for a royal visit. Right at a bend at the road, there's a well called the Queen's Well where she stopped for refreshment. When we pass it, I always shout "stop! Stop! One is thirsty!"

'I repaired and coordinated my Earth gyro' 17 min