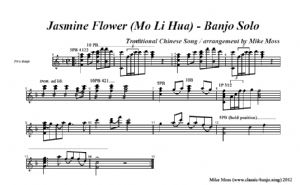 Has anyone tried the above arrangement? I just started working this in standard G tuning yesterday after finding but realized I needed to lower 4th string to C. My banjo site reading is slow and up-neck all the more so but basically this is working from a 5th position F and on up the neck and back. Some of chords seem off but not sure I don't need to re-do my intonation. I do have my one G-tuning melodic version that needs some brushing up and to post for others to comment, edit, etc. A young guy, Jim Lahey, has a good claw hammer version on YouTube: youtube.com/watch?v=teoCgbJURXE that looks like was performed in his dorm room. The links surrounding all these Mike Moss postings are no longer active. For all her talk about China, one would think Abigail Washburn would have a version since it's probably one of the best know, most played Chinese tunes in the world. If she plays it, I've not heard it.

I posted a recording of my arrangement back when I wrote this to illustrate my posting, but I took the recording down after a while. I'll post a new recording as soon as I've got a moment.

For this arrangement I only had a bare bones melody and I added most of the harmony myself, so if you have any suggestions for the chords I could also produce an improved version. Keep in mind that most if not all of my arrangements were written with Standard (drop C) tuning in mind, though one could probably adapt them to open G easily enough.

Please let me know if you need anything and I'll be happy to help.

Mike,
thanks for your reply. I look forward to hearing your future post. I'll work with chords more. My wife is Chinese so it's all the more interesting to me and I want to get this worked out. I'll transcribe what I do and you can tell me what you think. I do need to get better with using the drop C tuning. I should add I'm a guitar player playing banjo. My college-aged daughter started BG playing. She studied with Joe Snipes who's one of the noted BG teachers in our area, Joe Snipes. I learned by listening to her lessons and then copying tab Joe gave her. We also have a few banjo manuals and I'm a fan of teachers and ideas here. Before that, I followed the advice of the late West Coast TV/Move Studio player Tommy Tedesco, I tuned the banjo like a guitar (Chicago Tuning) and faked it as best I could.

I'm sure you've heard other versions. You've probably listened to a variety of versions to get sense of melody and harmony.
This is a very traditional version listed as being performed by vocalist Zhou Lingyan singing in the dialect WuYu : youtube.com/watch?v=4mvfE9NVdHU
This is instrumental with stylized Guzheng opening then with melody laid down by Erhu (2-string upright fiddle) and then harmonized when a Pipa (Chinese Lute) and Dizi (flute) join in. This probably helps hear all the harmonies better.
youtube.com/watch?v=9M4gca_uLB4

Thanks a lot! I also study Chinese myself, so it's always inspiring to work on projects in other aspects of the culture, such as music, as a part of the learning experience. Of course, there are always limitations inherent in using a Western instrument in equal temperament to perform Chinese music, but it's a fun experiment. I really liked both versions you posted, and I'll try to produce a new arrangement or, failing that, I'll just record my old version once I've got some work out of the way. I'll let you know as soon as I post it.

'Podcast on Tony Rice Remembrances by his Peers' 5 hrs