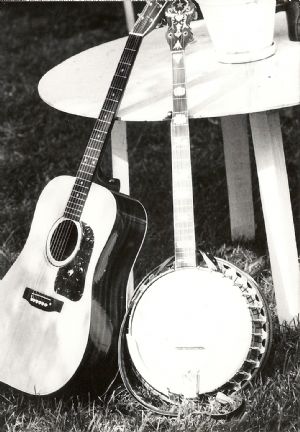 Long time friend John Balch posted photos from his trip to the Gallagher shop in War Trace, Tennessee along with his Gallagher he purchased in 1975. I met John shortly after he purchased his guitar and in the late 1970's I was playing a 1926 Vega Little Wonder that had been converted by Randy Wood. This Vega was purchased at George Gruhn's shop and had actually been on loan to John Hartford. He had taken it on a junket of gigs and was still tuned in one of those low funky keys John would use from time to time. John Balch caught this photo in his back yard after picking at his home.

2 comments on “Gallagher and Vega”

David: I did not remember the John Hartford connection on your old Vega banjo. It was a good one.

Yea that was shared when I picked up the banjo and it was tuned an octave low. You recall those odd tunings Hartford used on occasion.