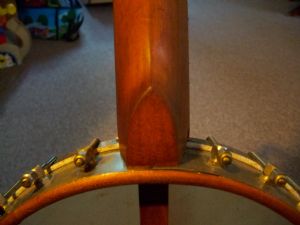 Since about 3 or 2 years ago I have been identifying such banjos as Buckbees. I have one which is almost if not completely identical to yours. In my case the german silver clad doesn't roll over wire rings, not at the top and not at the bottom. The head rest on rim's wood directly. The picture I am commenting on, shows that in your case, at least at the bottom there is no ring. Otherwise I have two more that do have the rings, and are of higher grades, having L-shape shoes (that's why the word "shoe" is used), high quality thick fingerboards (one could be real ebony), and pearl inlays. But the important thing is that I have also two very similar banjos one marked as George Washburn and the other Lyon Healy on their dowel sticks. These are designed and constructed way differently than the Buckbees, practically nothing to compare. There should be some relevant pictures at my BHO home - Yigal Zan.

Hello Yigal Zan. Thank you for the information. I couldn't find much online about this banjo. It is definitely a low end banjo , maybe that's why it is poorly documented. There are no markings on the dowel stick but the "1887 Durkee" tailpiece gave it away as a Lyon Healy.
I Believe the Lyon Healy company contracted Durkee for their tailpiece up until the 20's. The tuners have knobs made out of bakelite wich was invented around 1907. So the the banjo could be build anytime between 1907 to 1925.
Thanks again Yigal , I'll check out your BHO page
Frister

The direct url to my photos is,

The banjo that is almost identical to yours is the one held by Adam Hurt. The "onlays" were added by me - a long story. I also replaced the tuners with single guitar or mandolin uncovered, angled worm+gear type (these work better and don't make the banjo neck-heavy as do the planetary tuners). I also replaced the cheapy tail piece with a No Knot one. From what I have read Buckbee was making banjos and banjo parts for other companies. As a matter of fact many if not all "Dobson" banjos were made by Buckbee for the Dobson brothers, perhaps per their specifications. Lyon & Healy (AKA George Washburn) was most probably (that's what was said quite often in the Banjo News Letter during the seventies) a client of Buckbee as far as unmarked "low end" instruments are concerned (I am totally in love with these, and am not the only one). My experience, however limited, is that the high end banjos that were clearly marked as either George Washburn or Lyon & Healy do not show any Buckbee appointments. They were made by real luthiers with their own distinctive stylistic features. The pics of my GW and L&H (the latter sporting binding, engraved inlays, carved heel, etc.) were taken years ago by a film camera. They are not terribly clear. Finally by my standards your playing and singing is very very good. It was refreshing to watch and listen to your recent and some other videos. Yigal

Thank you for the kind words about my playing and singing Yigal. I'm always "searching" to get different sounds and atmospheres out of my banjo's. A nice journey it is so far!

'Flathead ring for a conversation from TB1?' 8 min