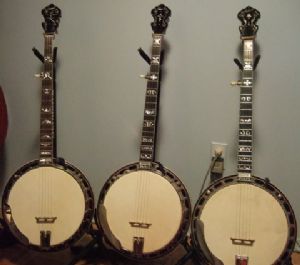 Which banjo is your "go to" banjo?

You're a man of few words Chris! You've convinced me. No doubt, that gibby is a "hoss!"

My Gibson is great; true! I have played it for 20+ years and it ranks among the best that I have been around. I also know how to do a good set-up.

That said, I will never say all Gibsons are equal. I have played some real duds. I have done set up work on some Gibsons where they still don't sound as good as other Gibsons; or other brands. I have spent time playing several really good banjos. Among those that I really, really liked were: Nechville, Frank Neat, Arthur Hatfield, Deering Ten Brooks series, Huber, Stealth, Recording King.

Don't listen with your eyes. Pre-war tone is all in the mind of the listener. Did Gus Cannon, or Buell Kazee have pre-war sound? They played before the war; on pre-war banjos.