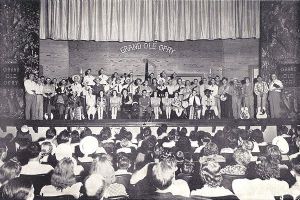 Can you identify any of the musicians in this early photo?

Uncle Dave (black vest and hat) in front row, Minnie Pearl three seats to his right, Monroe is behind and one man to UD's left (with mandolin), believe that is Brother Oswald in front row third from right end.  Looks like Cowboy Copas fourth man to Monroe's left.

PeeWee King is the accordion player in the cowboy hat & checkered shirt, front left . Roy Acuff is standing next to Hank Snow, middle left wearing the big white hat. The tall man with the white cowboy hat and black shirt w/ white yokes looks like Earnest Tubb, and the man sitting in front center looks like Don Reno. To the back and right of Tubb, the couple of men with the mando and banjo look like Sam and Kirk McGee. Judge Hayes, holding his 'steam whistle' seems to be front right, and it looks like Stringbean next to him, holding a guitar. The seated lady holding a banjo front, right of center, looks like Wilma Lee Cooper. regards, Mike Stanger

Thanks for the help guys.  Mike, I think the guy next to the solemn old judge is Snuffy Jenkins.  His waist is a little high for Stringbean.

Jim:  Very cool pic!  I can't do it, but if someone had photoshop and could blow this pic up to add the labels (names), that would really be great!

My eyes can't really see/tell who's who in here... and I'd like to know and appreciate them!

Ditto what Craig said; if this pic was from the early '50s, I could ID some of them!