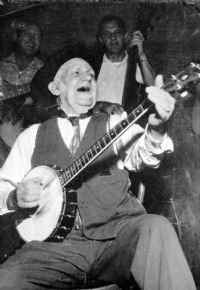 A group for the discussion of songsters and string bands from the 20's and 30's, and pickers who enjoy playing this music.

Sorry, I've been such a slacker about posting anything lately.  Here's some weekend reading that I hope you'll find interesting.

Austin Allen and Lee Allen were born in Sewanee, Tennessee.  Austin was born in 1901, and Lee was born five years later in 1906.  Their father worked in a sawmill, and as far as I could tell he wasn’t a musician, but their mother was a trained violinist, and Austin had an interest in music from a very early age.  Lee started taking piano lessons at the age of three.  Eventually Austin started playing the banjo, and Lee picked up the guitar and kazoo.  Its interesting to note that Austin played the tenor banjo, not the 5-string.

The brothers started out travelling around and playing in mining camps, medicine shows and performing on the Vaudeville stage.  Early on they played a lot of traditional, local songs and tunes, but later on started writing a lot of their own songs.  Eventually they were given the nickname of “The Chattanooga Boys”, because of the many references to Chattanooga in their songs.

They made their first recordings in Atlanta with Columbia Records.  It was in the spring of 1927, and the first song they recorded was Salty Dog Blues, and the other side was Bow Wow Blues.  This first record sold over 18000 copies.  In the fall of 1927 Columbia brought them back to Atlanta again, where they recorded two more sides: Laughin’ and Cryin’ Blues and Chattanooga Blues.  Its interesting to note that Columbia accidentally released this record as part of their “Race” series, which featured all African-American artists.  The white Allen Brothers apparently were not amused to say the least and the filed a $250000 lawsuit against Columbia.  The lawsuit was eventually dropped, and in 1928 they recorded Cheat ‘Em, and Ain’t That Skippin’ and A-Flyin’.  They eventually went on to record with Victor Records.  From what I can tell they recorded and performed up until sometime in 1934 when the depression finally put them out of the music business.

Unfortunately by the time they were “re-discovered” in the 60’s Austin had passed away in 1959, but Lee did perform a handful of times at folk festivals in Tennessee.

These guys are really fun to listen to.  The kazoo for me adds a really entertaining element to their music.  I got most of the information for this from Wikipedia, and the Bluegrass Messengers website.  I really recommend the Bluegrass Messengers site.  The entry on the Allen Brothers has some really interesting reading on “Hokum” in early country music and its origins in the minstrel shows.  One of my favorite songs by these guys is The Jake Walk Blues.  I never new what the song really meant but there is a good story about it which gives a really interesting background of the meaning.  The entry can be found here: http://www.bluegrassmessengers.com/allen-brothers-.aspx

If you get a chance listen to Jake Walk Blues, Ain't That Skippin' and A-Flyin', and Maybe Next Week Sometime.  These are three of my favourites, and I think all three of them are available for a listen on the JuneBerry78's site.