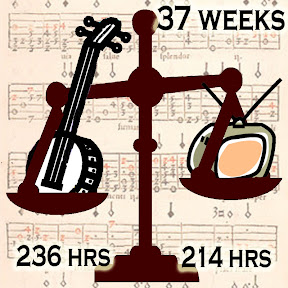 So why did the TV kick the banjo's butt this week? Two reasons: Water and the guitar.

The guitar because this was the week where I started my guitar lessons, and that time doesn't count as banjo time even though I'm doing this for banjo-related reasons. (I want to learn to recognize the chords that a guitarist plays during a jam session.)

Water because the roof to our apartment sprung a leak during the weekend storms. The redhead and I slept in shifts so that somebody would be awake to spot new leaks and to mop up. The TV was my stay-awake buddy during much of that time, so I racked up 9 hours and 11 minutes of TV time this week. (Ooooh! 9:11 for the week of 9/11. Is it something mystical, or just a coincidence? [Answer: Coincidence.])

Couldn't you practice in the middle of the night?  Don't you have a suitable collection of mutes, and doesn't the Redhead have ear plugs?  Remember the Boy Scout motto: be prepared.

Yeah, I've got mutes.  When I really want to mute the thing I put one two on them: a Fielding-Cutler Banjo Mute and the brush portion of a foam paintbrush.  That really does the trick.

But the situation with the water made it really hard to practice.  Water was seaping down a wall and out onto the floor, which required near-continuous mopping.  I couldn't figure out a way to do it while wearing the banjo.

'Will this change life as we know it? (future predictions)2' 35 min

'Questions about new hide head on my Goodtime' 5 hrs

'Something Creepy This Way Comes' 8 hrs