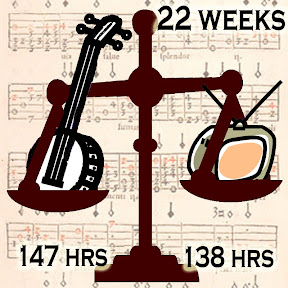 The numbers will tell you that my last three weeks have been light on the banjo, averaging only 4 hours per week of banjo time. That's half my usual pace. But I think this has been an important period in my banjo study, because I've been thinking.

Here are some of the things I've realized – most of which Mike has been trying to get me to learn for a while:

OK, so I've had a realization or two. What am I going to do about it?

Jr, I really have enjoyed your chronicle... has it been 22 weeks already?  Keep up the good work and thanks a million for letting us share the journey with you!

See you at MWB.  I still have to pack.

DON'T buy a digital-to-analog set top box and come next February, your banjo will leave the TV in the dust.