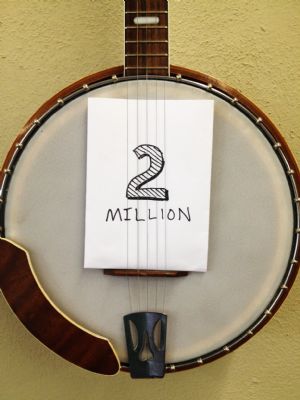 Sometime last night the 2 millionth post was written on the Banjo Hangout Forums. (You can see this and other stats at the bottom of the main forum page).

The forums were launched Jan 21, 2003, 3 years after the site launched (see my blog post announcing it). Members had been asking for a forum for a while, and I had been resisting the idea because I knew it would mean a lot of additional work in terms of moderating and site programming. In hindsight it was a brilliant suggestion by the many members who pushed for it.

Like most key features on the Banjo Hangout, it started as a member suggestion then blossomed from there.

Thanks so much to everyone who has been a part of the forum discussions these past 10+ years. Some of you have only posted a few times, and some of you have written several thousand posts. Over the years I've seen posts that made me laugh, while others have made me cry and some of made me downright angry. Through it all, though, I've learned much about the banjo, and the people who love this instrument. I wouldn't trade it for anything.

All of you are a part of this amazing community centered around the instrument we love, and it's my privilege to be a part of it all.

Currently the forum averages around 1,000 posts per day, so at that rate we'll hit 3 million posts within the next 3 years. Better get crackin!

(This photo features my old "Tempo" banjo--this is the banjo my wife gave me for Christmas of 1999, which led to the creation of the Banjo Hangout just a few weeks later. It now hangs on the "Hangout wall" at my office.)

Congrats Eric for making it happen! Thank You

Thanks for making it all possible Eric. I know from first hand experience what it's like to build and maintain a website. My site was small by comparison. So I take my hat of to you and your team for this amazing forum

Congratulations! It's a great place.

Thanks Eric,BHO is just a good place to be.

By my personal calculations, I had the 2 millionth post. What did I win??

A credit to your hard work and imagination - well done, Eric.

Congratulations Eric and thank you for this wonderful resource.

The post count currently shows 1,992,888. Is the discrepancy due to deleted posts?

Hm. It appears that number is calculated differently than I thought. Now I need to go in and find what the real post count is, since it was over 2 million yesterday! Stay tuned...

OK, went in and fixed the code so it's accurately counting things. Looks like we actually hit 2 million around a few months ago!

(It all depends on what you count, really. The actual database numbers say that members have made around 3.3 million posts, but that includes posts that were deleted back when we used to delete posts instead of archiving them, and it also includes posts that have been hidden by mods.)

Yup. That was a close one.

Congrats Eric and thanks for a truly great site. The best on the net, if you ask me!

Has anyone read all the posts? :-)