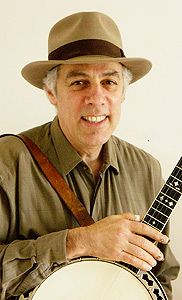 We've taken a bit of a break from offering our online group workshops this summer since so many folks are out cavorting at festivals during this season. Nevertheless, I've had quite a few people asking when we'll offer our next online workshop. So, I've scheduled a workshop for the end of this month with noted author Fred Sokolow.

The workshop is titled "How to Make Up Scruggs-Style Solos," and registration is $20. Here's the full description:

Fred shows you how to adlib solos instead of memorizing tab. You'll learn how to pick out a melody and how to embellish it, to give it a Scruggs-style flavor. We'll start in G and build solos to familiar tunes from bare-bones melody to a full solo with rolls, slides, pull-offs and hammer-ons. You can suggest some of the songs to work up. If there's time, we'll look at playing in C or other keys as well. Everything will be in first position, as much as possible (up the neck is a future lesson).

In the mid-'60s, to my ears Fred was the player who came closest to Earl...not only in being able to play everything Earl had recorded, but more importantly because he could THINK like Earl. He could play something very close to what Earl WOULD play, in spirit and touch, on just about anything. Fred plays many styles of music (including wonderful ragtime banjo) and has done a lot of guitar teaching, but has done less with his fantastic Scruggs-style banjo work. I'm delighted to see he's using his skill at this particular thing in a public way.

What is the time and length of the workshop?

If someone is unavailable at that time, can we sign up and watch it later, or must it be watched at that time?

If you sign up, I can send you a copy of the recording.